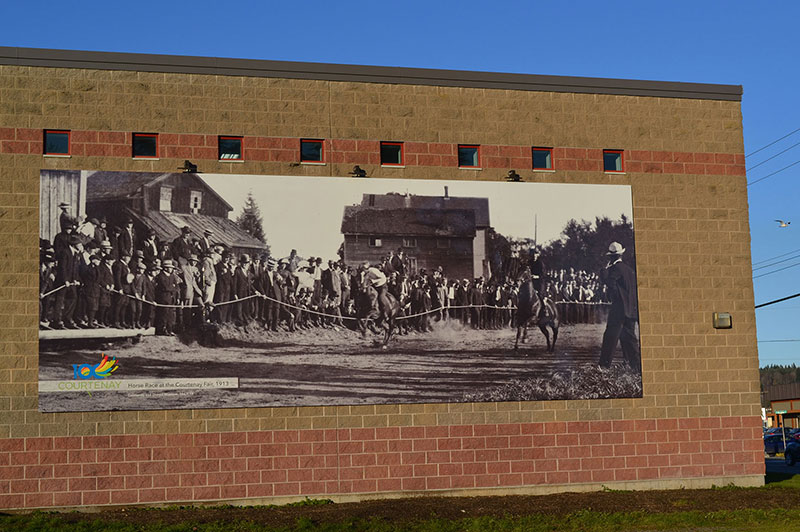 As Courtenay’s Centennial year comes to a close, new heritage photo murals on city buildings in and around downtown Courtenay will allow viewers to step back in time for years to come. The murals feature photos provided by the Courtenay and District Museum and show life in Courtenay around 1915.

“These photo murals help us celebrate our community’s history”, said Mayor Larry Jangula. “They illustrate where we as a city have come from and remind us of all we have accomplished in the last 100 years. They are a wonderful legacy of our centennial”

Other murals include a photo of a horse stable on the Courtenay Museum, scenes from the Courtenay wharf and bridge  on 6th Street at Cliffe Avenue, photos of Florence and Robert Filberg on the Florence Filberg Centre, and a scene from a Courtenay Parade float in the 1920’s on the Sid Williams lower windows. New images have also been added to the fence at 5th Street and England Avenue, with scenes of Courtenay life between 1915 – 1930.

Ron Webber, Chair of Courtenay’s Centennial Committee, said the murals provide a great closing to a successful and eventful centennial year. “I’ve seen many people stopping to look at the murals around downtown. As the centennial comes to a close, it’s nice to know these photos will be enjoyed for a long time.”

The murals are within walking distance from each other and make a good one hour walk.