Crews are making steady progress on the Fitzgerald Corridor Cycling Expansion Project. In order to expedite the project, on Monday September 30 and Tuesday October 1 between 7:00 am and 5:00 pm, the current road closure between 5th and 6th Streets will be extended to 8th Street/Cumberland Road, for paving.

On those days, Fitzgerald Avenue between 5th and 8th, as well as the work zone on 6th Street, are expected to reopen in the evenings outside of work hours, with a partial daytime reopening of the project corridor starting on Wednesday October 2, weather permitting.

Work is underway on a section of Fitzgerald Avenue in preparation for the Fitzgerald Corridor Cycling Expansion Project, resulting in traffic impacts on this busy corridor. Preparatory construction in the area has been ongoing since late August.

Starting Monday, September 23, the project will require a full road closure on Fitzgerald Avenue between 5th and 6th Streets, as well as 6th Street between Fitzgerald and Grant Avenues, for approximately two weeks, weather permitting. Detours will be in place.

To avoid delays, commuters are encouraged to use alternate routes during construction.

The project will include:

During construction, commuters are asked to watch for traffic control personnel, drive with caution around crews, and follow all posted signage.

A second phase of the project will extend the Fitzgerald bike lane from 21st to 26th Streets, as well as add road markings to 19th Street. Once completed, the full Fitzgerald Corridor Cycling Expansion project will provide critical connections from the City of Courtenay's downtown core to the Courtenay Riverway and Driftwood Mall, and provide a continuous north-south spine which will form the foundation of the cycling network on the west side of the City. Work on the southern portion of Fitzgerald will commence this fall. 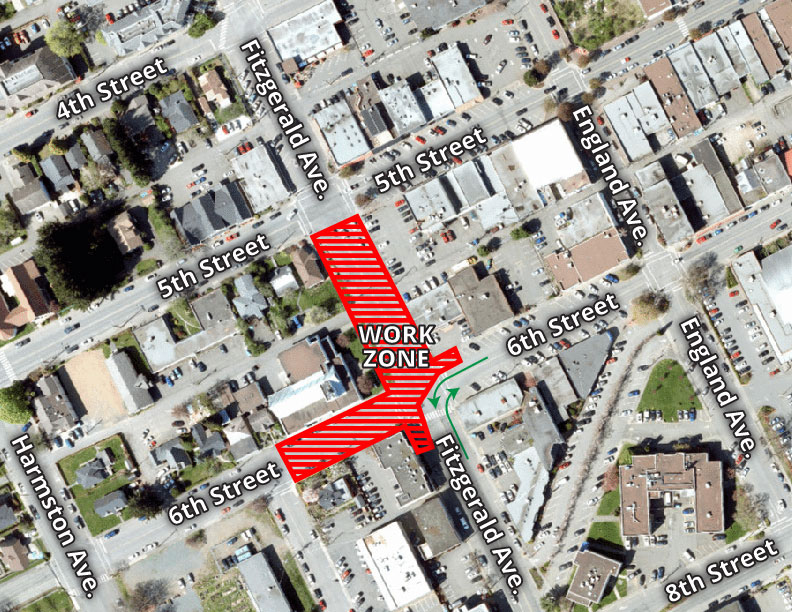