The City of Courtenay is putting the finishing touches on improvements to Veterans Memorial Parkway.

In addition to fresh pavement and road markings, the City is testing new flexible delineator posts along the edge of the bike lane to visually separate bikes and motor vehicles. Installation is expected to be completed by the end of August.

Mayor Bob Wells hopes the project will encourage more people to get on their bikes. “The more comfortable and connected we can make our cycling routes, the more people will use them,” said Wells. “This is an important corridor that connects the north end of the City to the hospital, the college, and other east Courtenay residential and business areas. Every improvement we can make to our cycling network represents another piece of the puzzle, and I look forward to continued progress and infrastructure improvements for active modes of transportation.”

The City will assess the performance and longevity of the delineators on a trial basis before considering whether to install them in other locations in Courtenay. City staff will also seek feedback from important stakeholder groups such as the Comox Valley Cycling Coalition.

“One of the specific recommendations from the City’s new Cycling Network Plan adopted by Council last year was to consider using these delineators on higher-volume roads where space was available,” said Kyle Shaw, Director of Public Works. “The delineators will help establish a buffered bike lane and provide a layer of comfort for cyclists. We’ll be monitoring their overall performance and durability, and watching how they last through street sweeping and other road maintenance activities.”

The City plans to remove the delineators over the winter to prevent damage from snow and ice control activities.

The new buffered bike lanes are on the right side of the road in each direction. They will connect with the existing bike lanes on Lerwick Road at the Comox Valley Hospital and continue until just east of the intersection of North Island Highway, where the paving project ends. 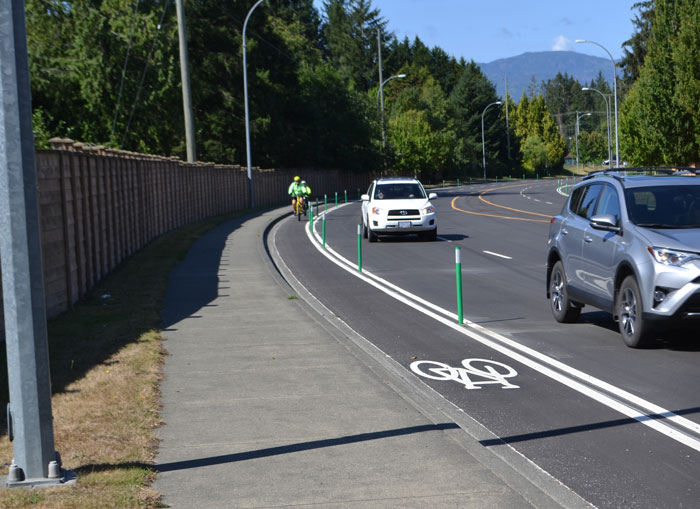 The Veterans Memorial Parkway overlay project is the City’s major road maintenance project for the year. The project has been ongoing since late April.

The City will overlay one final section of pavement on the section of Veterans Memorial Parkway between Valley Vista Estates and Mission Road once plans for potential development on adjacent vacant property have been confirmed. The City has received a development permit application for 2600 Mission Road, and an official community plan/zoning amendment application for 2700 Mission Road. If approved, service installations for these properties would require cutting into the pavement on Veterans Memorial Parkway.

Wherever possible, the City coordinates paving work with planned repairs and upgrades for underground services as part of its comprehensive asset management program. Asset management maximizes the life span of the City’s infrastructure at the lowest long-term cost. Learn more: www.courtenay.ca/assetmanagement

For more information, contact Public Works at 250-338-1525 or email publicworks@courtenay.ca