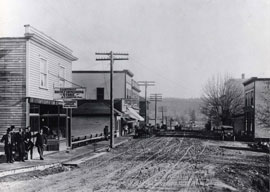 Early Courtenay existed mainly east of the Courtenay River, around the site of the Courtenay Hotel, which still stands on what is now known as the Old Island Highway. There were barbershops, blacksmiths, a laundry, a bicycle shop general stores and grocery stores. There were several livery stables which provided all sorts of transportation. The Agricultural Hall was on the site of the present-day Lewis Centre, and was the centre of many of the town’s activities. Downtown Courtenay’s later development on the west side of the Courtenay River can be traced back to Reginald Pidcock, and his decision to start a lumber mill on the west side in 1865. This necessitated the building of a bridge to access the mill. In 1874 the bridge was completed.

The development of “New Courtenay” on the other side of the river happened almost by chance. Mr. Pidcock owned all of the land on the west side. He needed money to pay for an engine for a steamboat he had built, “The Daisy”. When he ran into trouble raising the $3,500, Joseph McPhee offered to buy part of Mr. Pidcock’s land.

“I suppose Pidcock wondered what I had in mind to do with the property I got from him. I said, ‘I am going to lay out a townsite here.’ It surprised everyone. I said to Pidcock, ‘Now if you think there is something in it and you want to come in with me, we will lay out a town half on your land and half on mine.’”

By 1912, the townsite of Courtenay was growing rapidly. Young men from "the old country" were coming to settle on Vancouver Island, and many of them ended up in Courtenay.

Courtenay’s incorporation in 1915 was the subject of much debate. The motivation was the arrival of electricity. A small group of landowners feared the power company would take control of utilities. They developed a group to oppose any granting of a franchise by the government. They decided to have a one square mile area incorporated as a city.

“We must incorporate and we must do it at once. What will our citizens who have been opposing incorporation think to themselves if they let this octopus get its tentacles fastened upon us?”

“Much of the main street of Courtenay was destroyed by a fire which apparently started in a men’s wear shop which was located on the present site of Laver’s store on the corner of Cliffe Avenue and 5th Street. It spread across the street and up both sides of 5th. The closest and most plentiful supply of water was the well of the Comox Creamery. This water was made available through the cooperation of Mr. Carroll, the buttermaker. Both the main well and its own dairy shaft were pumped dry in the effort to save the town and a third well in the Carroll home was drained. A bucket brigade, using cream cans, was set up from the river to the fire and every available person took a hand in trying to save the town.” 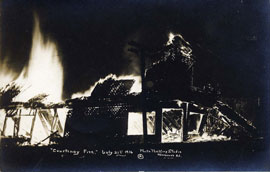 The August 3, 1916 edition of the Courtenay Review describes the efforts of Courtenay citizens on that night.

"A large crowd of citizens quickly gathered, and everything possible was carried out of the Opera house first, the picture machine and the piano being saved. All the shops on that side of the street were quickly emptied of their contents, and had there been any dynamite in town Anderton's office might have been blown up and Marocchi's saved. The fire quickly spread to all the buildings on the south side of the street, and the heat soon set fire to the Calhoun and McKeau blocks where the occupants, assisted by many willing workers, were clearing the stores of goods. The Royal Bank also caught about that time and a shot was put into it after most of the furniture had been taken out. It did not do any good however, and the building burned up. Wet blankets were held over the corner of the Riverside hotel and water poured on the roof by willing workers, and the building was saved, the only damage being to the windows and the paint."

On this day, a fire burned most of the south side of the main block in the centre of 5th Street. By the time firefighters arrived, the whole side of the street had been so severely damaged that the any shells of structures still standing had to be torn down. The fire is said to have started in Hannay's confectionary and tobaccoist shop, but quickly spread to Blunt and Ewart's garage.

"In the most disastrous fire that has visited Courtenay since 1916, four buildings were utterly destroyed and another badly wrecked and a property damage of at least fifty-thousand dollars inflicted. The Courtenay Fire brigade, assisted by the Cumberland Fire brigade, did excellent work or the damage would have been much more extensive."

The Riverside Hotel was the most prominent of the new buildings constructed in Courtenay's early days, in around 1890. It was destroyed by fire in 1968.

“The Wall at the Riverside Hotel became as famous as the Great Wall of China. Courtenay’s Wall was the fountain of wisdom, the pedestal of politics and the judge’s stand for rating the passing ladies.

The Old Timers who used it regularly were characters in themselves. They seemed immune to weather or time. Their sage remarks, sarcastic comments and colourful language were accepted as long as they sat on the wall. Fire and time have erased an institution.”