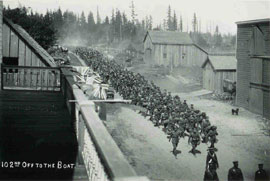 The 102nd Canadian Infantry Battalion was the Comox Valley’s first battalion. It was initially mobilized in 1915. In the beginning, the Battalion divided its men between Comox and Courtenay, until a camp was formed at Goose Spit in Comox.

“Frankly, conditions at Comox and Courtenay were deplorable. The men were told in all good faith to take nothing with them; that clothing, blankets and almost all the luxuries of home would be waiting for them upon arrival; the half-hearted suggestion of a moving-picture proprietor that he might open up a show in camp in the future was exaggerated until the recruit believed that he would find the bright lights of Broadway twinkling on the Spit. And when the men arrived by ones and twos, or in parties, they found – nothing, not even clothes. There was a “hold-up” somewhere and it was a long and tedious job to pry loose the fingers that were holding so fast to the supplies, and all the time, throughout the bitterest winter that had been known for years on Vancouver Island, the newly recruited men, who had deliberately left behind them warm clothing, were starving with cold. […]

“The snowfall was phenomenal and on more than one occasion the men were called out of their beds to clear the roof before the weight of snow brought it down on their heads. […] The first building erected for a messhall collapsed, partly owing to snow but more largely because the small body of Engineers on the spot who were responsible for its design were more competent in theory than in practice. Colonel Warden pleaded that his recruits, who were all practical, outdoor men, be allowed to go ahead and make a camp for themselves, but red tape ruled that if the Government supplied the material, it should also supply the brains; unfortunately the Government was only in a position to supply heads. In addition to this kind of work the troops at Comox rendered enormous benefits to the people of the district in helping them to clear away the snow which in every locality was proving a very real menace to safety.”

From BC to Baiseux by L. McLeod Gould, M.S.M. Croix de Guerre

The welcome arrival of spring marked an improvement in living conditions. A large number of men from Prince Rupert and Prince George marched in to join those already arrived from Vancouver, Nelson and Vernon. The men from the North were so numerous they formed a company by themselves, and the name of the battalion became known as the 102nd (North British Columbians) Overseas Battalion.

On Saturday, June 10, 1916, the battalion marched through Comox for the last time to board the S.S. “Princess Charlotte” for Vancouver, the first step of their journey overseas.

After a lengthy train trip across Canada, the battalion set sail from Halifax on the “Empress of Britain” on June 20, 1916. They arrived in Britain after a nasty voyage, and quickly became recognized for being “particularly well prepared and composed of the tallest, the heaviest, and the most maturedly aged of any unit that had reached England.” (Land of Plenty, p. 356).

On August 12, 1916, the battalion landed in France. “Throughout the next three years this battalion compiled a record of military service of which Comox District can ever be proud.” (Land of Plenty, p. 356)