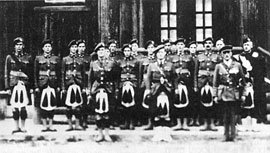 The “C” Company of the Canadian Scottish Regiment was established in Courtenay in 1931. It was plagued with difficulties from its inception, such as a lack of decent quarters. The Comox District Agricultural Hall was the first drill hall, and it was in disrepair with little hope of improvement.

“I find that it is nearly impossible for us to carry on with our parades owing to the condition of the said building; windows broken from the outside, doors broken off hinges and the front door being open allowing children to play there, leaving it in a filthy condition which necessitates our cleaning it up before using it on drill nights.” (Land of Plenty, p358)

Fortunately their situation improved in 1934 when they took over part of the Native Sons Hall in Courtenay.

When World War II started, the Canadian Scottish Regiment went through a period of rapid growth. They eventually moved to Debert, N.S. on October 9, 1941 and spent a “miserable” year training at an unfinished camp. They spent a good deal of time doing World War I style training, which was now out of date and had to be drastically changed later on.

After almost a year in Debert, the regiment left for Europe. They were to finally see action on “D” Day, June 6, 1944. They were in continuous action from that day until the end of the war.

“’C’ Company was now very close to the shore, and those who had been watching the landmarks on the beach pulled their heads down as enemy machine gun fire began to strike the craft. The beach obstacles were close, and even though the solders could no longer see them the swerving of the craft and the curses of the sailor at the wheel warned them that the beach was only yards away. At about ten minutes to eight the company’s assault craft grounded on the shore, their ramps dropped down, and out dashed the men, some of them in four or five feet of water, and some almost dryshod.” (Land of Plenty, p360)

Captain Roger Schelderup, of the Comox District, was in the middle of the action, and was awarded the M.C. for his leadership and bravery on D Day. He went ashore with 45 men under his command; at the end of the day, there were only 19 men left.  He and the rest of the remaining men of “C” Company were later taken prisoner by the Germans. Captain Schelderup managed to escape, and brought back valuable information regarding enemy strength and positions.

The Canadian Scottish Regiment continued their advance until “V.E. Day” was declared on May 5, 1945. The remaining members of the regiment returned to Canada on December 22, 1945.

Sandwick Army Camp had been a farm owned by Sam Piercy. It covered 165 acres, and was purchased by the Canadian Government in 1941. Initially the men at the camp lived in tents, but their housing was gradually upgraded to barracks. The site of this camp is now Georges P. Vanier Secondary School.

This site was also home to the Combined Operation School, which opened in 1942 on instructions from Pacific Command. The school was organized in two parts, an Army Wing and a Navy wing. During the Second World War, this school trained over 25,000 troops.

When the war ended, the army camp was left intact for some time, as it was the ideal location for a peace-time unit.

The Combined Operations Training School was completed in the winter of 1942. The tragedy of Dieppe had come and gone, and many lessons learned. There was to be much hard fighting on the beaches and rocky shores of Europe.

Courtenay was one of the Allied Stations, where the complexities of “Combined Operations” warfare was taught and experienced. Wooden Assault Craft were built by the Army and manned by the R.C.N. Fisherman’s Reserve personnel. The “Army Camp”, located on the old Piercy farm provided accommodation and training facilities for the many Infantry Battalions and Combat Teams, preparing for “D” Day and the landings on Normany beaches. The four week course prepared them for some of what they had to experience.

The R.C.N. Fisherman’s Reserve Barracks were in Lewis Park, close to the present day outdoor swimming pool. The assault craft were moored in the Courtenay Slough. The combat and landing exercises were held on the local beaches, islands and rivers.