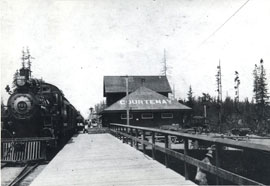 The Courtenay Train Station was built in 1914, when the Esquimalt and Nanaimo Railway reached the Comox Valley. This station was originally intended to be just one more stop along the railway that was to continue north all the way to Campbell River. The Great War put a stop to construction of the northern rail service, however, and by war's end, improved highway and trucking services left the end of the line just north of 5th Street. 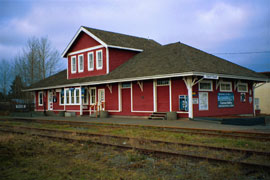 The train station was an important part of daily life in Courtenay. Trains delivered passengers and mail. Freight trains carried heavier items, such as farm equipment, trucks and even livestock. There was a corral at 5th Street right by the railway line. Depending on the schedule, the train would often stay overnight in Courtenay. There were sleeping quarters on the top floor of the station for the crew.

Trains would reach the end of the line, then would use a "Y" system to turn around, unlike many other stations which used roundabouts. The "Y" would cross 5th Street, then back up into what is now the Public Works yard. The trains would then make the turn and head south back down to Victoria.

The Courtenay Train Station was given heritage status by the City of Courtenay in 2002.