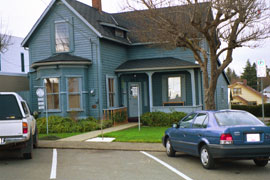 The Creech house stands as a monument to the quaint Victorian style home of the working class of the late 1800’s. This is one of the few original dwellings remaining standing in the City of Courtenay.

Records available indicate this two storey home was originally constructed by the Fletcher family sometime in the early 1890’s. Mr. Edward (Ned) Creech purchased it around 1905, and moved in with his wife Eliza Jane and 6 children. This commenced approximately 75 years of occupancy by members of the Creech family. The house also became the headquarters and office of their livery stable and transportation and trucking businesses.

Mr. and Mrs. Ed Creech and their three sons, Harry, James Ernest and Albert, moved to the Comox Valley from Victoria in 1887. They rented a small cottage from William Duncan on Headquarters Road, just north of Dingwall Road, on the edge of the Tsolum River. During this time four more children were born. They opened a small livery stable just north of the Courtenay Hotel.

They operated a “horse-drawn transportation business”, hauling produce and supplies for the farming community. They moved their livery stable from the North Island Highway to the property on Alice Street and opened a blacksmith and wagon repair shop on the east side of Anderton Avenue (then called Mill Street).

With the advent of the internal combustion engine in trucks, mechanized trucks replaced the horses and wagons. Several makes of trucks were part of their fleet, including a 1918 Republic, Federal, Day Elder and a 1936 Ford and Fargo. Many of these old trucks were well-used and then retired to the warehouse, along with other antique trucks purchased for parts. The neighbourhood children enjoyed climbing behind the wheel to play on these old trucks.

The Creech brothers were all bachelors. However, Dick had a brush with matrimony, purchasing another house on Sunnyside (now McPhee) Avenue. He remodeled and partially furnished it, but unfortunately neglected to tell his future bride. Consequently, she called off the wedding. Dick announced that if this was the way women behaved, he would forget it and remain a bachelor. He subsequently sold the house to Cyril Burns in 1927, who lived in the house his entire life until his passing in 2005.

Many farmers used the Creech Bros for transport of produce and livestock. However, Dick was notorious for his stories and “snail’s pace”. He was once hired to move a newly purchased cow from Headquarters Road to Arden Road at an appointed hour. Considerable time passed by, and the new owner of the cow became anxious for the safety of his animal and set out to search for the delivery truck. He noticed a truck, carrying a lone cow, parked behind the Courtenay Hotel. This was his cow! But where was the driver? He found Dick Creech inside, having a “cool one or two” on a hot afternoon.

Dick Creech was a well-known character in Courtenay. Many of his stories about hunting, fishing and prospecting originated in the Riverside Hotel bar. When he wasn’t inside quenching his thirst, you could find him sitting on “The Wall” of the Riverside Hotel, on the corner of 5th and Cliffe, exchanging words of wisdom on politics and commenting on the passing ladies.

Following the death of the senior Creechs, the sons continued to occupy the house where each was responsible for their respective areas. During these years the house became known as a bachelor’s paradise. It also suffered a fire on May 13, 1947 which caused considerable damage.

The house has since been restored to its present beautiful condition without altering the building’s unique character. Beautifully landscaped, complete with old trees, it is a reminder of the City’s heritage.

The Creech House was honoured with a City of Courtenay Heritage Commemoration in 1998.

From the files of Lawrence Burns, past Heritage Commission Chair and son of Cyril Burns