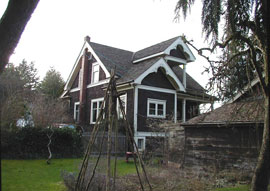 This house is one of the oldest in the City of Courtenay, and has not had significant alterations since it was constructed in 1912. 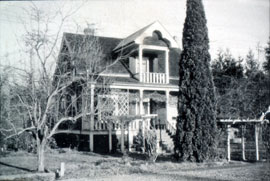 The house was constructed by Mr. Ledgerwood, a well-respected contractor in the early days of the City. This house is a fine example of a pre-1914 home, with “gingerbread” trim, which are still visible on the roof peaks. At the time the house was built, it was situated on an acreage that ran all the way to the E & N Railway.

"John ‘Scoop’ Johnston was a well-known and outspoken local politician. When he arrived in the valley…he had taken up 160 acres of homestead land in the Black Creek area. The roof of his shack was made from logs that he had “scooped” out. No one had ever before seen this method of “shingling” a cabin, so the nickname “Scoop” was given to the young settler, a name that would identify him forever after.”

The house on Stewart Avenue was designed as a family home, but Johnston never married. He preferred “batching”, and spent most of his time living in a shack on the same site.

He was a strong proponent of publicly owned utilities to distribute water and electricity. His strong political convictions led him to the front of the polls in Courtenay’s first municipal election in 1915. He served as alderman, and later became police constable in 1919. He died on February 27, 1921 before the water system was installed in the City.

The Scoop Johnston House was honoured with a City of Courtenay Heritage Commemoration in 2003.