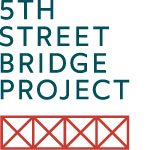 Thank you for your patience during construction. The investment in this essential transportation corridor has preserved and extended the life of the bridge well into the future.

The 5th Street Bridge plays an important role in the entire Comox Valley transportation network serving 20,000 vehicles, 650 pedestrians and 500 cyclists each day. Originally constructed in 1960, the 72‐metre steel truss bridge has two vehicle lanes and 1.5 metre sidewalks on both sides of the bridge.

Although the bridge has had regular maintenance over the past decades, as with any major asset, periodic major maintenance and repairs are required throughout its lifespan. The lead‐based coating was at the end of its service life. The bridge deck and overlay were also identified as needing repair. Bridge rehabilitation was determind as the most cost‐effective and efficient solution.

The project was Courtenay's largest infrastructure project in decades, and included removal of the existing concrete overlay, repairs to the bridge deck and deck beams, refurbished handrails, removal of the lead paint, recoating of the steel structure, and new road markings.

The lead paint removal required that the bridge be “wrapped” to prevent contaminants from entering the environment. The scaffold installation, as well as subsequent repairs to the bridge deck, resulted in the bridge being reduced to single lane alternating traffic for the duration of the project.

A traffic management strategy was developed to evaluate the impacts the project would have on road users.  Maintaining safe access for all modes of the transportation during the construction was a priority for the project team. The strategy recommended a single lane alternating traffic sequence to allow traffic to cross the bridge at all times.

Priority lanes were established for emergency services, transit and cyclists. Dedicated space was provided on the bridge deck for pedestrians. Maintaining single-lane traffic across the bridge during construction added an estimated $700,000 to the project budget.

Bridge construction began in mid-April 2021. The bridge reopened to two-way traffic in February 2022.