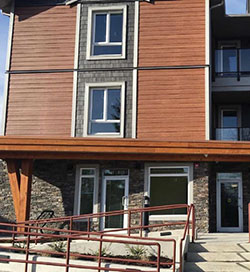 The Braidwood Apartments were years in the making, involving cooperation between regional local governments and service organizations, the Province of BC and BC Housing, and the Wachiay Friendship Centre and M’akola Housing Society, who partnered on the development and continue operating the facility as the property managers.

The completion of this project in 2019 added 35 much-needed new units of affordable rental housing in a central location within walking distance to shops, services, and transit. The project received $4.6 million in capital funding from the Province of BC.

The City of Courtenay donated the land for the project, and offset municipal fees charges, levies and other associated costs. Additional financial support for this housing project came from the Comox Valley Regional District and Island Health. Combined, these local contributions add up to almost half a million dollars toward this project.

Additional Information on Housing and Homelessness